One of the roadblocks to widespread electric vehicles adoption is the requirement of the charging infrastructure that will enable recharging the EV batteries in the shortest time. Ample, a seven-year old startup based out of Silicon Valley, is working to skirt this big hurdle by implementing the idea of automated battery swaps for EV drivers concerned about running out of charge while driving. The company has launched the world's first modular battery-swapping system in California's Bay Area that can recharge an electric car in less than 10 minutes.

Founded in 2014, Ample co-founders Khaled Hassounah and John de Souza have spent the last seven years studying how to swap batteries in a cheap and vehicle-agnostic way. The company started the charging system through a partnership with Uber and has raised over $70 million from investors, including oil & gas giants Shell and Repsol. The charging technique used by the company compared to many previous battery-swapping attempts is that instead of replacing one large single battery, the system replaces multiple smaller battery packs during a swap. Ample currently operates five battery swap stations in the San Francisco Bay Area specifically for Uber drivers, with a maximum capacity of 90 cars per day. The network is expected to hit the general market within a couple of years.

In an interview with EE Times, co-founders Khaled Hassounah and John de Souza described the charging modules used by Ample as a 'Lego-style system' that can be assembled into various sizes and shapes to fit different EVs. Using a combination of wireless communication and computer vision, the charging station can determine the size of the vehicle and the exact location of each battery module to be swapped. Ample uses a modular system of lithium-ion packs in which each module holds about three kilowatt hours of power and arranges them on trays. Once the discharged battery modules are removed from the car, they are stacked on trays so that they can be charged again and kept ready for the next vehicle. Unlike typical charging stations which can take anywhere from 45 minutes to 12 hours to charge an EV, Ample's charging station removes the car's batteries and replaces them with fully charged ones in under 10 minutes. The discharged battery modules are placed on racks at the station where they are recharged and used for future cars.

Ample has also developed the system as entirely autonomous where customers operate the system using an app and don't even need to get out of the car to charge the vehicle. The station automatically detects the vehicle and is capable of handling the battery packs of numerous cars simultaneously.

Last month, a beta tester driving a Nissan Leaf pulled into one of the Ample battery-swapping stations in San Francisco. The Leaf driver initiated the swap procedure by using Ample's smartphone app. A set of robot metal arms under the wheels lifted the car from the floor and unloaded a series of battery packs from under the vehicle. After being detached from the vehicle, each container was whisked back into the hidden portion of the station where the modules are removed and placed on a shelf for recharging. The system then replaced the depleted modules removed from the car with fully charged ones.

The entire demonstration of the process took roughly 12 minutes, a beta-testing speed that Ample said is slower than it's capable of. The company aims to shorten the swap time to under five minutes by the end of 2021.

Late last year, Ample entered a partnership with Uber to help coordinate with the fleet management services that provide drivers with cars, insurance, and other services. In March, the company announced the deployment of five charging stations around the Bay Area. The company says nearly 100 Uber drivers are using them, making an average of 1.3 swaps per day. Ample also announced a partnership in June with Sally, a fleet management service that specialises in making EVs available to fleet drivers. The two plan to work together to deploy EVs and swapping stations in San Francisco, New York, Los Angeles and Chicago.

Swapping battery modules offers an elegant solution for recharging EVs quickly without taxing the grid. Tesla initially experimented with the swapping technology in 2013 but soon closed it, opting instead to build its network of “Superchargers.” The startup Better Place launched a battery swapping system for EVs but went bankrupt in 2013, after raising nearly $1 billion in venture funding.  Ample’s co-founder Khaled Hassounah said that the company's modular battery is cheaper than Tesla's attempt and will eventually fit any car, unlike Better Place's battery swapping method.

Currently, Ample is deploying its stations in additional Bay Area locations for fleet vehicles only. However, it is planning to expand its service for other EV drivers as well. If the idea catches on with automakers, the time spent waiting at a charging station to charge an EV battery may come to an end as we replace cables with tiny robotic arms working to get electric vehicles back on the road in less than 10 minutes. 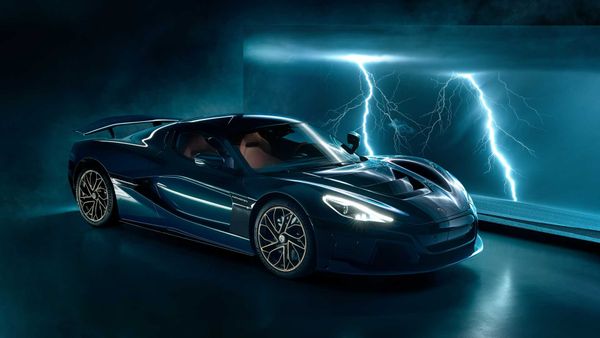 Rimac Automobili, a hypercar manufacturer and high-performance battery specialist from Croatia, introduced the Rimac C-Two concept at the International Geneva Motor Show in 2018. The production-ready iteration of the hypercar

On 26 May, Ford Motor Co outlined plans to boost spending on its electrification efforts and announced that the company aims to have 40% of its global vehicle volume to