China’s Great Wall Motors (GWM) has revealed another spin-off brand called Saloon launching it with a buoyant electric liftback at the 2021 Guangzhou Auto Show. Saloon plans to launch several electric cars including Coupes, SUVs, MPVs, and other crossbody style vehicles globally in the price range of 400,000 to 800,000 yuan (GBP 47,004.68 to GBP 94,004.30), Saloon plans to put its upcoming range of electric cars and SUVs against the Tesla Model S, X, Mercedes EQC, Audi e-Tron, BMW i4 and upwards models.

As per a report by China’s Financial Associated Press, Saloon will target global sales of 200,000 vehicles globally by 2025 with one new launch each year. Jijialong (which means ‘Mecha Dragon’ in English), is the first Saloon electric car unveiled at the same show.

Under the skin, the Mecha Dragon uses a dual-electric motor setup giving a combined output of 405kW of power(543 hp) and 750Nm (551 pound-feet) of torque. The electric powertrain has a ‘Dayu’ battery developed by GWM ‘Dayu’  with a capacity of 115kWh and 800-volt technology offering an 802 km (498-mile) electric range in China light-duty vehicle test cycle. Due to the ultra-fast charging capability, the vehicle can charge at an incredibly high 480 kilowatts allowing for recouping 250 miles (401 kilometres) in just 10 minutes. The saloon also claims that the Mecha Dragon can accelerate from 0-100 km/h in 3.7 seconds.

The new four-door coupe is fully electric with a premium cabin and has an angular design. Describing the model as a “medium-to-large coupe” and measuring 5.2m (204.7 inches) in length, the Company claims its appearance was designed to resemble “mechanical armor.”

The Mecha Dragon has quite a high-tech interior that incorporates the latest technology in terms of connectivity, safety and infotainment. There's an enormous widescreen running on most of the length of the dashboard having a digital instrument cluster. GWM claims Mecha Dragon to be the first model in the world featuring four lidars that are combined with 38 intelligent sensing components including ultrasonic sensors, radars, cameras and more.

On the front, the headlights are squared-off, having a hint of modified Lamborghini Gallardo like vents and scoops aiming to invoke a classic sports car aesthetic. The model also has Michelin performance tyres and Brembo brakes.

Tesla has introduced its electric four-wheel ATV (all-terrain vehicle) called the Cyberquad for kids on December 2 as a potential gift for the holidays. Inspired by the iconic Tesla Cybertruck 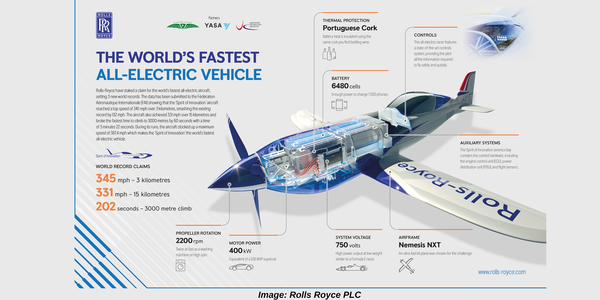 Rolls-Royce, the company best known for its luxury cars, is claiming three world records for its all-electric aircraft, after the company concluded its series of test runs at the UK